The pathway reconstruction is underway and is proceeding at a slow pace. I'm not worried how long it takes as I won't have to "pay the piper" until it is done. Today the gang (4 of them, now I know why it is so expensive) lifted the old flagstones and laid them out in order in the garage. They were extremely heavy, some are huge, definitely a two-or three-man job to mover each one. They then prepared the forms for laying the concrete base which will be done on Friday, weather permitting, and levelled the ground. It is an interesting process. 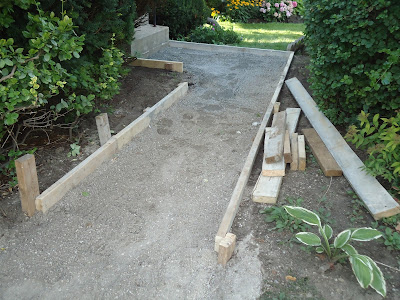 Just my usual Wednesday at the senior's centre although I was late getting there and took the later fitness class. Very quiet in the kitchen so I left at 2:30 and came home to watch Rafa demolishing his Russian opponent. It is raining in New York so the matches are having to be played indoors. There are two more this evening.

I took a piece of fish out the freezer but is still half frozen so I will save it for tomorrow. I'll make a quiche instead.