One more pool entry and then I will cease and desist form mentioning how fortunate I am to be able to cool off in it!

After yesterday's brief dip I had a longer swim today as the temperature of the water is almost 70F. However, first thing this morning I had a nasty shock as there was a dead animal floating in it when I got up! I have had the odd mouse, bird or squirrel meet its maker in the pristine waters but this one was big!

It turned out to be a raccoon and, being a bit squeamish, I decided to elicit help in removing it. I called 311 (the City help line) but they said animal services would not come on to my property to remove it. Then I called a Wildlife service I have used in the past (squirrels and raccoons in the attic ) but they wanted $300 to come and remove it. So back to City Services and they agreed to pick it up if it was on my boulevard, which is actually city property.

So I gritted my teeth, took a shovel and a pail and managed to remove it myself. It was a gruesome affair and I actually felt some pity for the poor animal. Soon it will be picked up and out of my mind and responsibility. I hope that's the last one I have to deal with!

The pool is up and running (I had a short dip this afternoon, cold but refreshing) but the pool guys left a note saying that they couldn't get the heater started - so, another unplanned-for repair bill. There have been way too many of these this year!

The air conditioner has just come on for the first time this year so at least that's working. Another lovely sunny day and not as humid. I should sleep well tonight.

Pool's open and filling as we speak. It's still a bit green but that will improve overnight. I'm hoping for the promised thunderstorm to help with filling it, otherwise it will just be the garden hose and that takes several hours. The temperature is a chilly 62F! 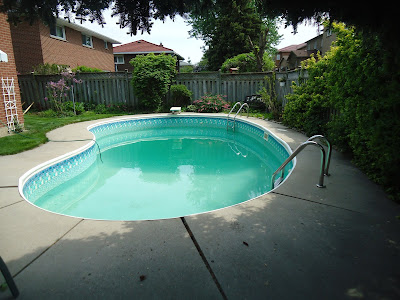 Time for the Pool

Waiting for it to cool down so I can tidy up the back yard (cut grass, trim borders etc.) The pool guys are coming tomorrow to take the cover off my pool and start up the circulation system. Always a tense moment while we wait to see if everything survived the winter!

I have sweated buckets today as it is 29C and very humid - I could really have done with a swim!

In the winter we have the wind chill factor but now we have the humidex. This is how hot it actually feels when the humidity is high. For example, today's  temperature of 29C actually feels like 32C. I can attest to that as I drove home this afternoon with the car windows open! The house interior is still a comfortable 21C so I won't need the air conditioning tonight.

The RTO AGM went off without a hitch (although I left someone off the list of committee chairs - I had to apologize but she wasn't too upset). We had a delicious salmon lunch and a special cake as it is the 50th Anniversary of RTO. We had to change the location of our next meeting as it falls on Provincial Election Day (June 7) and the facility we normally use is to be a polling station.

Getting lots of gardening done as the weather has been beautiful, but it is set to go up to 30C by the weekend. So Spring, such as it was, is over.

Last Wednesday we were out of town for a theatre trip to see "West Side Story". It was an excellent production with vibrant music and dance and a group of very talented performers.

Before the show we stopped at a Butterfly Conservatory in Cambridge. The colour and size of some of the butterflies was amazing. Imagine getting to hold a 10cm. long stick insect! 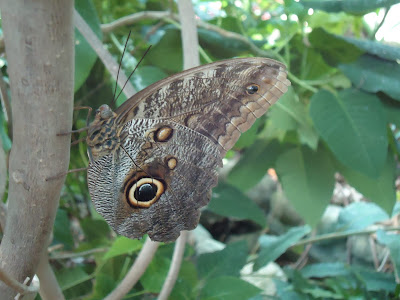 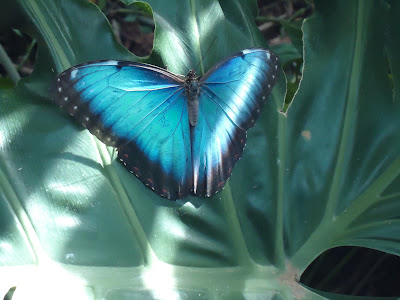 End of a Busy Week

Just realized I haven't had to cook dinner since last Friday! This is how my week went:

Last Saturday I attended the West Toronto Ball at Casa Colombo. We had a delicious meal - pasta (it is an Italian venue, after all!), chicken and salmon with nicely prepared vegetables and a chocolate mousse with coffee to finish. Then we danced to live music until midnight although I left just before 11:00 p.m. as my feet and legs were complaining.

On Sunday I had dinner with Judy and family for Mother's Day. Steve and Alison were there too and the men cooked the meal - tasty chicken with plenty of crunchy salads. Judy had found a chocolate fountain at the thrift store and she got it running after dinner. Fruit, sponge cake and pretzels for dipping, a fun and easy way to serve dessert! Everyone was very impressed. I went home with a lovely hanging basket (from Steve) and a 1000 piece jigsaw puzzle from Judy. I have yet to start it as it looks quite challenging!

Monday was our final night at Dance group so we had a pot luck party after dancing for an hour. I didn't bother with dinner before I went as there is always tons of food!

On Tuesday I was out for lunch with the retired teachers (salmon, salad, tasty vegetables and a yummy cheesecake with raspberry coulis) so just soup and a sandwich for dinner.

Wednesday was a bus outing to St. Jacob's to see "West Side Story". First stop was the Butterfly Conservatory in Cambridge - I had never been and it was very much worth a visit. Then lunch in Waterloo before the theatre show so no dinner needed again that night. The show was quite spectacular, well worth the bus trip.

On Thursday Donna, Marilyn and I  went to Remizzio's after the Probus meeting and I had lobster bisque followed by crab cakes, my usual choices when we are there. Another soup and sandwich dinner as I wasn't too hungry by the evening.

Today was back to my usual routines but I needed to use up some vegetables so made a batch of fennel and carrot soup and an eggplant Caponata so that was dinner. I had taken some chicken out of the freezer but couldn't face it or salmon one more time this week!

Some severe damage from the Friday storm but I was largely spared - no trees down and only one section of my fence came loose. Walking around the neighbourhood I saw several whole fences down and lots of roof shingles lying around. Some areas of the city were without power for some time as fallen tree branches brought down power lines.

It has been mixed weather since then but I did get some tennis this morning - singles with Susan but it was quite tiring as it was still windy. Not all the wind screens are up.

After I got home I made some soup for lunch, put a loaf on in the bread machine and had a nap. The bread was a bit on the heavy side - it was a Rapid Bake. But it will be nice with the stew I made yesterday - lots of vegetables and I just had to open a bottle of Merlot to deglaze the pan. So that will be my drink of choice tonight!

We have had some glorious weather this week (up in the 20's) but today started off cool and rainy. It was very foggy until almost noon when things started brightening up. I had been down to the tennis courts but the courts never did get dry enough to play.

Since then it has been rainy, windy and I even heard some thunder. I cut the front grass (first cut of the year) just before all this wild weather happened. Then two torrential rain showers, the gutters were overflowing. Right now it is back to sunny but it is blowing a gale. I had to bring in the rod that operates my canopy as it kept hitting the window. Hope it stays dry as I am off to the theatre this evening to see "The Perfect Wedding" at Markham Little Theatre for free as I am an usher.

Everything is starting to grow in the garden and the trees have buds just about ready to burst forth. Things will be green very soon!