The Good, the Bad and the Ugly

A day and a half of almost constant rain so I have been mopping puddles in my basement again. However, I have had someone come and look into the problem and they will be back to fix it relatively soon. In the mean time I am hoping for no more heavy rainfall as I am extremely tired of the constant mopping!

I went back to have my ear checked this week ( I think I wrote about it earlier) - it was a basal cell carcinoma and, unfortunately, they didn't get the whole thing on the first visit so there was some more cutting and scraping, thankfully all under anesthetic. It wasn't as bad as the first time and should be all healed in a couple of weeks, fingers crossed.

I was getting tired of the fish dishes I have been producing recently so tried something new the other night - curried fish with braised kale. It was quite good. It had shredded coconut in it which was an interesting addition.

The Fruits of Fall

My mountain ash (Rowan) tree is ready but no sign of the robins. They have usually stripped it bare by this time. Folklore says that when there is an abundance of berries it is going to be a hard winter. 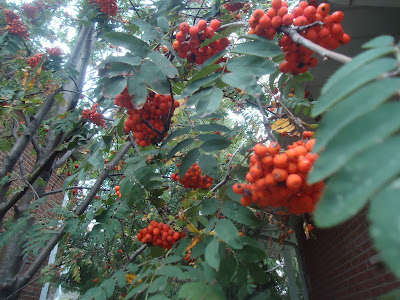 One rose bush still blooming, this is one of my favourites as the blooms and the buds are so delicate. 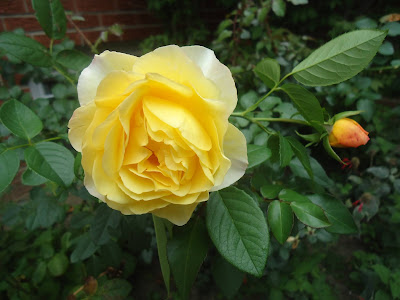 An End-of-Summer Right of Passage

I have since had two swims (actually twice today so that makes three) as it has been a beautiful weekend. So happy I postponed the pool closure until next week. We often have a summery week late in September so that has been a definite bonus!

I cleaned the pool yesterday so it won't be too disgusting when the pool guys come to partially drain it and put the cover on. That is always a sad day but at least my electricity bill will be reduced considerably, and the water bill as well. I couldn't survive the summer without a pool but it is quite an expensive luxury.

A lovely morning at the tennis courts, clear sky, mild temperatures, not much of a breeze and super friends. I was on the winning side for both sets for a change (on Tuesday I was the big loser) thanks mostly to my stalwart partners, so went home happy. We are still starting at 8:00 but that will have to change soon as the sun is rising later and is lower in the sky, making it difficult to see the ball for the first hour.

Senior's Day at the drug store so I walked down and picked up the mail and a couple of items. Always nice to get a 10% reduction although that barely amounts to the tax! Since then just gardening and reading outside, an easy day. The pool is still open but too chilly for a swim.

Tennis Grand Slams over for another year. The finals at the U.S. Open were both exciting matches but neither had predictable results. All players excelled themselves though. Now what will I do for entertainment?

Today has been quiet as Mondays usually are. I didn't accomplish much but did walk down to the local polling station to cast my vote in the advanced poll. It was held at the Seniors Centre where I play Bridge, attend exercise classes and volunteer in the kitchen and, good news, they may be opening for "in person" activities later this month. Can't wait, I have really missed my Bridge group. Hope I remember how to play!

Don't know if I mentioned the big storm we had a couple of nights ago - trees down, power outages etc., but I just got some water in my basement that necessitated much sponging and mopping. I will have to have someone come and fix that REAL soon!

As a result of all the rain I have been gung-ho to pull up all the weeds in between the driveway and the sidewalk. They came out a treat and the area got a good spray of "Weed Begone". This is something that needs to be done before winter as it makes shoveling the driveway so much easier if they are not there. Hopefully that is it now taken care of.

The storm, unfortunately, brought down most of my gigantic sunflowers and some devious animal(s) had a field day feasting on the seeds. So that left a mess to be cleared up. I think it was probably raccoons, although the squirrels may have joined in. Either way, they had a real party. The remains are now in the composter but I wouldn't be surprised if that got raided too.

....new to me, that is.   It's Alex Michaelides, whose latest book, "The Maidens", I have just finished. It's a thriller/mystery with a very creepy component. If that is a type of story that appeals, give it a try. I have requested his earlier book, "The Silent Patient" which I'm sure will be equally compelling. Can't wait to get it!

Labour Day yesterday - as far as I was concerned it was just my usual Monday. In the past (before COVID) there would have been a social at the tennis club and a barbecue lunch, but that has gone by the wayside for the last two summers, along with the Victoria Day, Canada Day and Thanksgiving socials.

However, I have been engrossed with the U.S. Open tournament in which Canadians have been doing pretty well and there have been some spectacular matches. Today I spent a tense 2 hours watching Leylah Fernandez make her way into the semi-finals. She has just turned 19 and is one of three teenagers into the quarter finals. If she goes no further she will have covered herself with glory, without a doubt. Another Canadian is playing tonight to move into the next round but it will be a nail-biter, for sure!

I had to have minor surgery on my outer ear this morning for a growth and it is throbbing a bit, nothing that a glass of wine won't put right. I don't have any tennis until Thursday so, hopefully, by then it will be a thing of the past. I will go back in two weeks so the doctor can check that it is all gone. Fingers crossed!

Maybe the End of Summer

The grandkids were over today for what might be the last swim of the summer for them. The nights have been cooler this week and it takes about 3 or 4 hours with the heater running to get the temperature up to their standards. I will keep having a daily dip until the water is just too cold even for me.

She barely managed to get immersed. As you can see, her hair is still dry.
We had a fun afternoon while Judy was getting her classroom ready for the start of school next week.