I was going to title this post "Problem NOT Solved" but, miraculously, today I was able to sign in on the first try. Fingers crossed this continues to be the case.

The chaos in the title didn't occur to me personally but did affect me. It happened at the Senior's Centre where I volunteer in the kitchen on Wednesdays, dispensing tea, coffee and the occasional meat pie. It's usually an easy job and, in fact, I always bring a book to read during quiet spells.

Today a barbecue was planned and fifty people had bought tickets. When it came time to start cooking the burgers, the outdoor gas BBQ wouldn't at first turn on and then refused to heat up. I think it had been tested beforehand but hadn't actually been used since before the pandemic. So a battalion of cooks descended on the kitchen and proceeded to fry, bake or microwave the burgers while an impatient group of seniors muttered and griped in the background!

Finally everyone was fed although there were lots of complaints and blame going around but the worst part for me was the state of the kitchen when all was said and done. The clean up crew beat a hasty retreat and I was left with a messy stove and umpteen greasy platters. On the plus side, there was leftover salad which I purloined and will have for dinner tonight! My reward for not complaining about the extra work, I guess.

I seem to have fixed the vexing problem of not being able to sign in to Blogger. It was something called "HTTPS redirect" that had somehow gotten turned off.  So now I can comment on other blogs and reply on my own blog as myself instead of being anonymous. Yippee!

Still hot here but overcast with the promise of some rain. I hope it materializes. It's still in the upper 20's but quite comfortable indoors, thank goodness. On Wednesdays I usually walk over to the senior's centre for my fitness class and volunteering in the kitchen, but, today, because of the heat and the threat of a thunder storm (which never did arrive), I took the car. I'm glad I did as I was home by 3:00 p.m. in time for a nap and a swim. I haven't been sleeping well because of the heat ( the upstairs bedrooms are always hotter) and have needed a nap most afternoons.

I'm hoping that tomorrow I will be able to survive the two hours on the tennis courts and not let my friends down by quitting early. We will start at 8:00 a.m. and drink lots of water to stay hydrated. Wish me luck!

Extremely hot today - I only managed just over an hour of tennis although we started at 8:00 a.m. I had to bow out at that point and the others stopped then too. Back home for a refreshing swim and, after a well deserved coffee, got out the hose. Lots of flowers blooming in the garden which I have to keep well watered. I have two shades of phlox in the rockery. I stayed indoors until later in the afternoon when I did a bit of weed-pulling. Then I needed another swim! 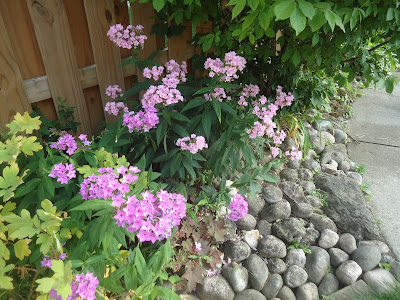 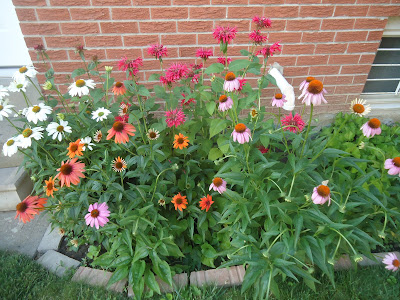 The bees and butterflies are busy around the echinacea and bee balm. At 7:00 p.m. it is still very hot and humid but at least now we have some cloud cover. It would be nice if it rained!

Bounty from the Garden

Well, that may be a bit of an exaggeration but I have been picking kale and rhubarb for the last two weeks and today I got this: 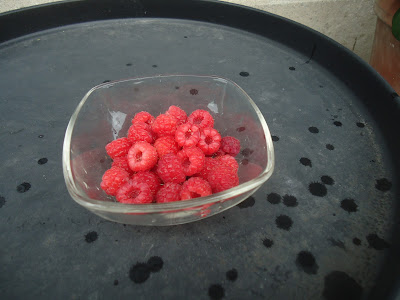 This will be dessert tonight. There are still lots coming. 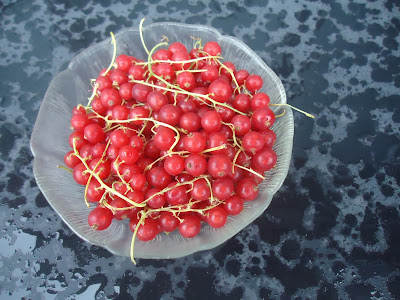 These are rather tart so I will stew, sweeten and  strain them to get rid of the seeds. 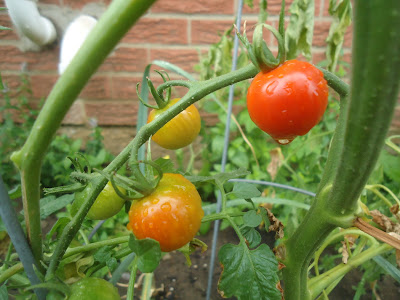 The cherry tomatoes are looking almost ready to pick but I will give them another few days. 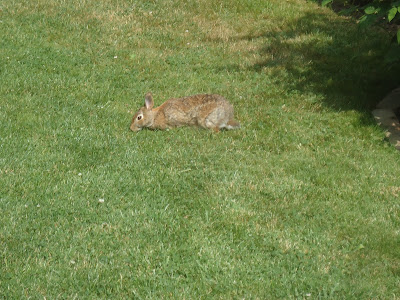 This little guy was out munching on the clover the other morning and let me get quite close for a photo before hopping under the raspberry bushes. I think he is pretty well fed in my garden!
Posted by Chris at 15:25 10 comments:

Just to let all my followers know that I am still unable to sign in to Blogger unless I create a new post, so that is why I am not posting comments on the blogs I follow. I am reading and enjoying your posts and hopefully, will be able to comment eventually!

Cooler, so got out the baking stuff

I hate to have the oven on when it's hot and humid but today has been relatively cool and fresh so no problems there.

I have had some puff pastry in the freezer for who knows how long so I dug it and some sausages out when I got home from the senior's centre. The pastry didn't look its best but rolled out OK and the sausage rolls came together nicely. But what to do with the leftover pastry? There wasn't enough for a double crust pie but I managed to line a pie plate with it.

A quick dash into the garden and a plunder of the rhubarb patch produced enough rhubarb for a crostini (at least, I think that's what it's called). It's basically an open topped pie with the fruit dumped in the middle and the sides partially wrapped around it. A few dabs of jam on top and a final brush with a beaten egg and it was ready for the oven. 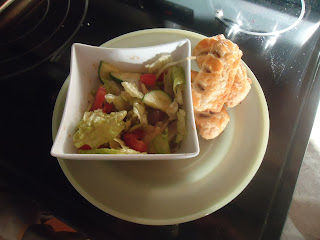 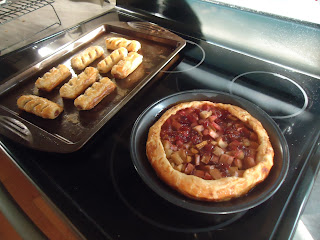 They turned out not too badly and, with a salad, made a satisfying meal. Amazing what you can conjure up from the freezer and the garden!

Early run to the grocery store this morning (tennis was rained out) and I was a bit flummoxed by the sudden increase in prices from last week. I saw a 3 lb. bag of avocados for $9 and eggs were $3.60 a dozen, to name a couple of shocks. I didn't buy the avocados but I did buy the eggs. Butter was also up in price but I did buy it too.

However, on the way home I noticed that gas was $1.87 a litre quite a bit down from the over $2 price a week ago. This is courtesy of our Premier, Doug Ford who promised to reduce the tax on gas if he was re-elected. Glad to see he kept his promise this time!

Yesterday, July 1st., was Canada Day and I had my flag hanging at my front door to celebrate. Shortly after breakfast I headed to my other tennis club to play a round robin until it started raining. Following a BBQ lunch  there were speeches and prizes (I won a can of tennis balls - very welcome) and we all sang "O, Canada" our national anthem.

I didn't do much in the afternoon and had a light dinner as lunch was pretty hearty. There were fireworks in the evening which I watched on my back deck but one annoying fellow was still setting them off after midnight which was not very neighbourly!

Today, as it was still quite cool in the morning, I had a long walk before breakfast and have been watching Wimbledon ever since. Things are getting interesting! More of the same tomorrow so it has been a very pleasant long weekend so far.

"Sparkling Merlot" asked about butter tarts - I thought they were a thing in most Commonwealth countries. This is all that's left of the half dozen I bought at the Farmer's Market on Wednesday and I'm surprised there are even three left. I have to keep them in the freezer so as to limit myself to one a day! 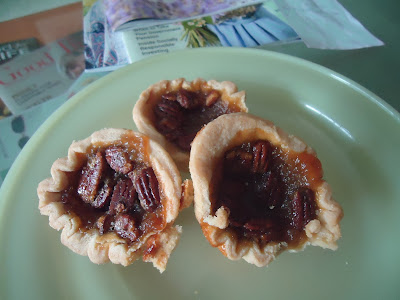 They are actually quite easy to make although I have never been able to reproduce the proper pastry. The filling is basically melted butter, brown sugar and eggs but the big controversy is whether to leave them plain or add nuts or raisins. These have pecans although I am partial to raisins too. These just looked the most scrumptious! To make them truly Canadian (it is Canada Day today) you can add maple syrup to the filling.

In our part of Ontario you can follow the "Butter Tart Route" where different towns and villages claim to have the best butter tarts around. Now following that tour would be my idea of heaven!