I have been very naughty this week, overindulging at the expense of my bank account. Normally I eat out, at the most, once a week and some weeks not at all, so this trend is rather troubling.

Tuesday was the monthly retired teachers' lunch which I had already paid for by cheque. It was lasagna and salad with rhubarb pie and coffee for "afters". The speaker was "Officer Bob" (I think I have mentioned him before, his topic this time was Romance and other scams specifically aimed at seniors. He's quite funny while imparting an important message.

Wednesday was my youngest grandson's 13th birthday (all three are now teenagers and quite a handful (glad I'm not either of their parents). I was invited to dinner to help him celebrate and it was steak, roast potatoes, salad and a green veg followed by yummy birthday cake. The conversation at the table was lively, to say the least, and ranged through a variety of topics which were all hotly contested. I barely got a word in edgewise! That meal just cost me his birthday present (money) and a card so I got off lightly.

On Thursday I attended the Probus meeting and was persuaded to join some friends for lunch afterwards. Six of us went to a local all-day breakfast joint which I had been to before and knew to order lightly as the helpings are enormous! Even then I still had to bring some home for dinner - I had Spanakopita and it wasn't even that good, but I ate it all regardless so I didn't have to cook any dinner that night. It cost more than I thought it was worth but I gave the waitress a nice tip as she treated us well. I don't think I'll go back there again.

So now my waistline and my wallet need a bit of a break so I will be eating and spending less next week.

One bonus - I picked up a Tim Horton's coffee before the Probus meeting (our coffee break is still cancelled and I had gone there straight from my Yoga class) and had earned enough points to get my "small decaf double-double" free!

My Bridge group has just voted to continue wearing masks (I voted for optional masking). We are all seniors but mostly in good health and have discontinued our snack break. Some members have been unable to return because for some reason they can't wear masks. Others have said if masking becomes optional they won't be attending. A problematic situation!

My dance groups (where there is much more contact and heavy breathing) also wear masks and, in addition, sanitize hands between dances. However, both groups have reinstated tea break where we remove our masks and sit in small groups.

Are we being over cautious in one situation or too relaxed in the other? I didn't wear a mask last week when I went to see a movie but the theatre was quite empty and I was able to keep a good distance from the other patrons. Same in restaurants, masks off as soon as we sit down to eat.

I'm thoroughly confused as to what is the best policy with new strains popping up regularly. What are your experiences with mask protocols?

Occasionally, here in Ontario, we experience a January thaw but this year has been quite out of the ordinary. For one thing the January thaw actually started in the last week of December.

Despite having a fair amount of snow last month, we now have none! Everything is green and only a few piles of shoveled snow remain in spots. It seems quite incongruous. I do recall one winter some years ago when we stayed at a friend's chalet with hope of spending the week between Christmas and New Year skiing. It rained almost every day and needless to say the hills were a washout, but most years it is much more what we expect at this time of year - snow and more snow!

I didn't manage to stay awake to bring in the new year in proper Scottish fashion - I still haven't had my "First Foot", perhaps I will ask the mailman to bring me good luck by stepping over the threshold tomorrow, I know he's tall and dark - but I did drink a toast (of Caramel Bailey's) before I retired!

My wish for all my readers is to have a safe, healthy and prosperous year in 2023. Think I'll go and have another small glass of Bailey's.

The roads have been cleared so the family was able to get here for our annual Christmas feast. And what a feast it was - as usual I cooked way too much food so I will be eating leftovers for the rest of the week. Judy took home some of the bird, half the plum pudding and custard and the mincemeat pies I had made - they just did not have room for them, even oldest grandson who has a hollow leg!

So now I am sprawled on the couch, covered with my new thermal throw (a gift from the grands) but I won't be eating anything more until tomorrow. Well, maybe a small chicken and cranberry sandwich before bed! 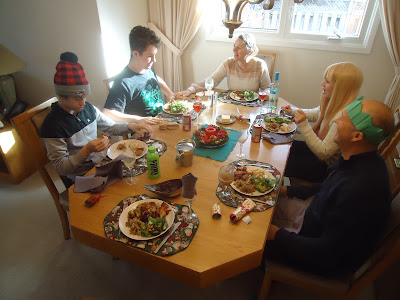 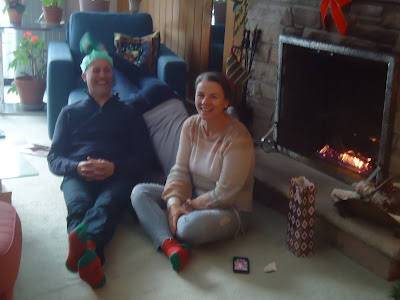 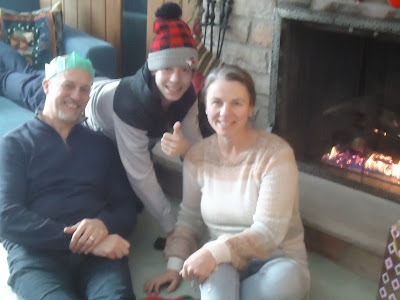 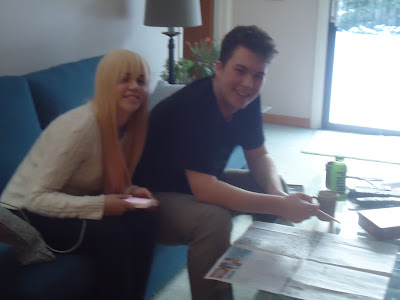 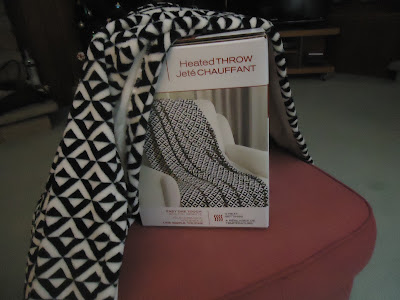 Youngest grandson wore his Blue Jays hat through the whole meal (usually no hats allowed but it was his favourite Christmas gift so he got a special dispensation) and can you tell what granddaughter's favourite gift was? (hint: it's also on her head).

We played some games before they left for home but we were all a bit sleepy by then so that didn't last long. Finally we Face Timed with the family in Victoria for a bit before they went to have their feast. They are four hours behind us. Now to tackle the clean up. Thank goodness for a dishwasher!

Hope all my readers had a very Merry Christmas and best wishes for a Happy New Year!