Let kings and courtiers rise and fa',
This world has mony turns.
But brightly beams aboon them a'
The star of Rabbie Burns.
The immortal Rabbie Burns is usually celebrated around the time of his birth date, January 29th. However, many of the Petronella dancers were entertaining at other Burns' suppers at that time. These events took place in Retirement Homes, church halls, and recreation centres around the GTA and sometimes we joined the audience for the ceremony and sometimes not. So it seemed fitting that we celebrate  in our own way - with food and dance!﻿

A great time was had by one and all at the 2nd. annual Burn's Supper at the Petronella Scottish Country Dance group this Saturday. Once everyone had assembled, the haggis was piped in and Donald, accompanied by Graeme, David and Muriel gave the "Address to the Haggis".


Auld Scotland wants nae skinking ware,
That jaups in luggies;
But, if ye wish her gratefu' prayer
Gie her a Haggis! 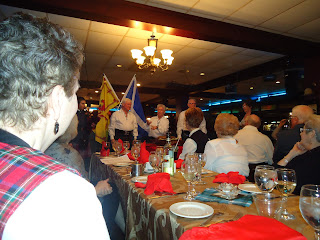 Duncan led us in the Selkirk Grace:           Some hae meat but canna eat
and some wad eat that want it .
But we hae meat and we can eat,
So may the laird be thankit.
Then followed the meal and much jollity, followed by the Toast the the Immortal Memory (Duncan again), Address to the Lassies (Ian), Address to the Laddies (Jenn) and then, now that we were all stuffed with good food and drink, what we had all come for ..... the dancing!

Maureen led us through the dances in admirable fashion and although we may not have burned off all the calories acquired during the meal, we were well heated and puffing by the end of the evening. Some of my favourites: 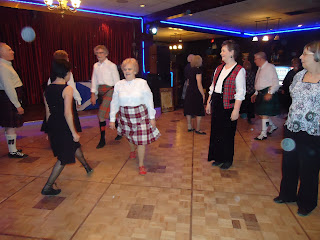 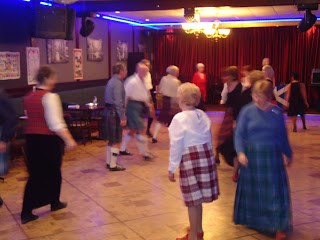 Near midnight a tired but happy crew wended its way homeward with sore feet but happy hearts, having participated in the fellowship that comes from taking part in the community that is Scottish Country Dancing.
In the words of the Immortal Bard:
Adieu, dear amiable youth!
Your heart can ne'er be wanting!
May prudence, fortitude and truth,
Erect your brow undaunting!
In ploughman phrase, 'God send you speed',
Still daily to grow wiser;
And may ye better reck the rede,
Than ever did th'adviser! 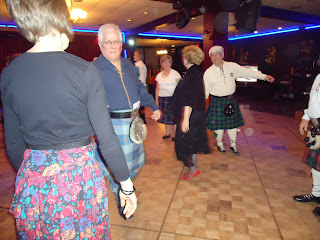